It seems like captioning photos should be fairly straightforward, but there seem to be a lot of people online who can’t grasp the concept of the basics. This list of mislabeled pictures proves just how important it is to double-check before you caption a photo. If you don’t, then you might wind up getting called out. But the Twitter account @Classic_picx seems to have mislabeled pictures down to a science. You won’t be able to pick just one favorite. 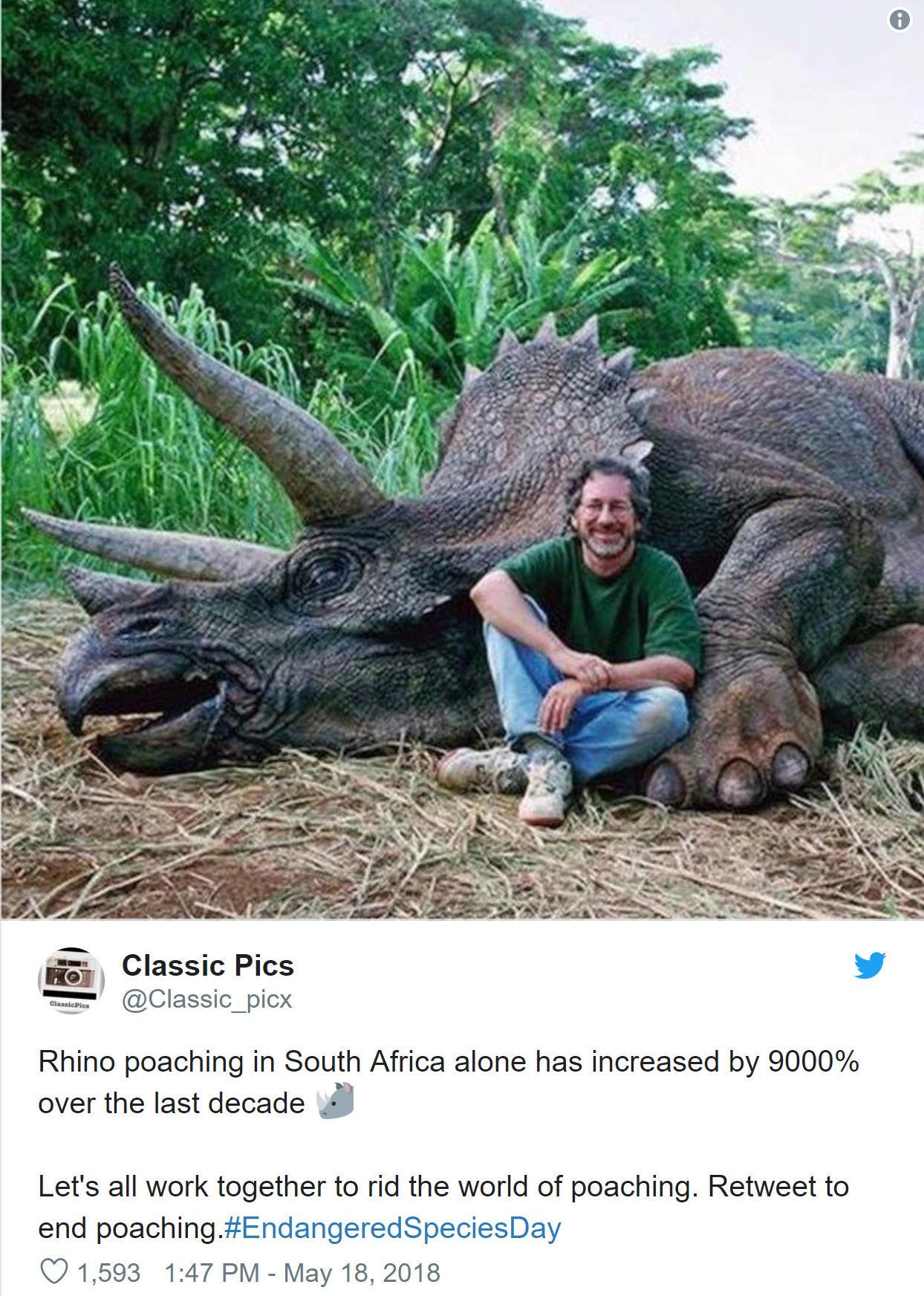 Oh, and in case you were wondering, this wasn’t done by mistake. The account is a parody of misinformation, but this label fails will definitely have you rolling on the floor. Of course, rhino poaching in South Africa is no laughing matter. But this Twitter account really went above and beyond in terms of hilarity by posting a photo of Steven Spielberg sitting next to a wounded (but fake) triceratops.

We’re sure retired English soccer player Micky Quinn would not appreciate this comparison. 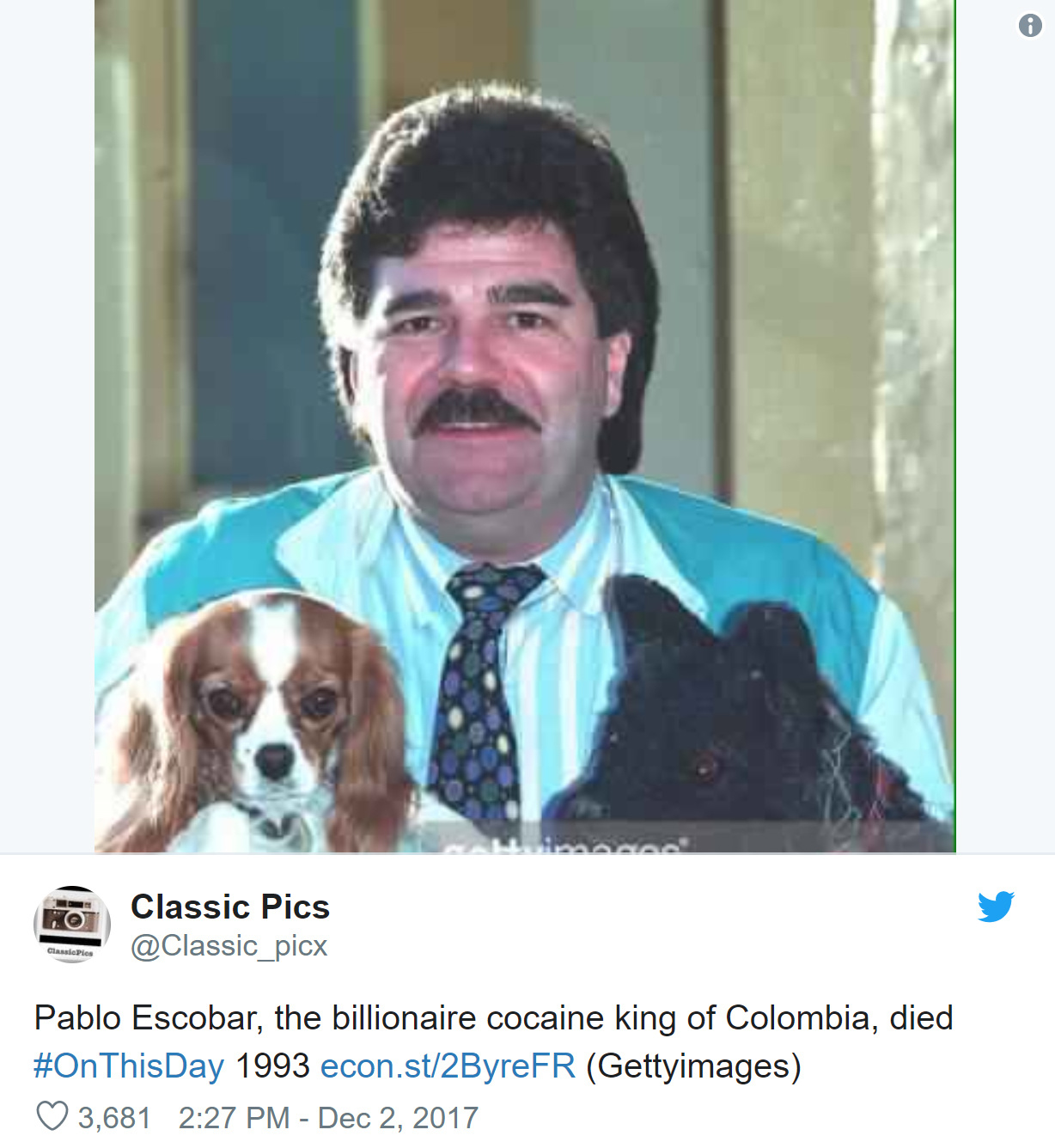 But you have to admit, that the two do look alike. You probably thought those cute pups he was holding were Escobar’s attack dogs, but you’re wrong. And while Quinn has retired from professional soccer, Escobar has forcefully retired from life.

What the heck is happening with this obvious mislabel? It’s simply bonkers! Are you crying yet? 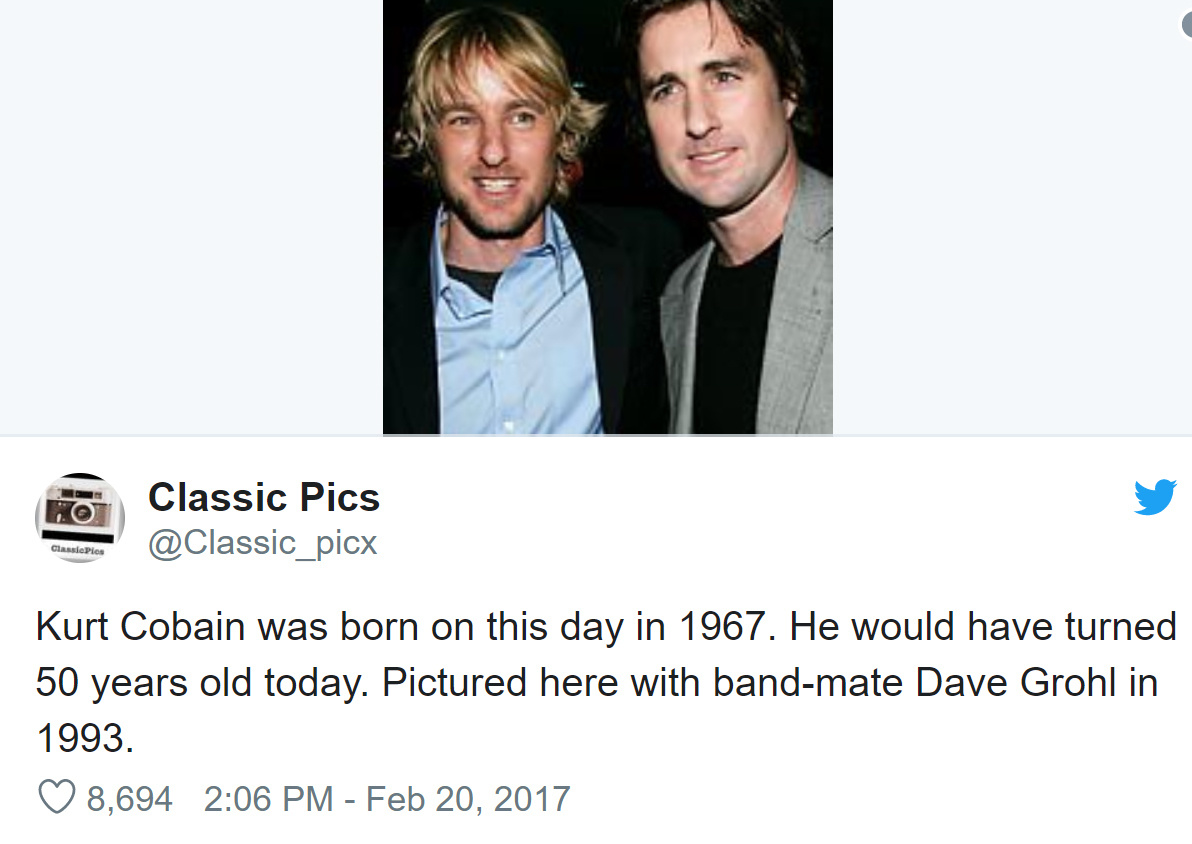 These goofballs totally confused the Wilson brothers with Kurt Cobain and Dave Grohl. Clearly, no one’s been doing their homework before posting these pictures. Hey! Maybe we’re all wrong, and this is just an image of Hall and Oates. 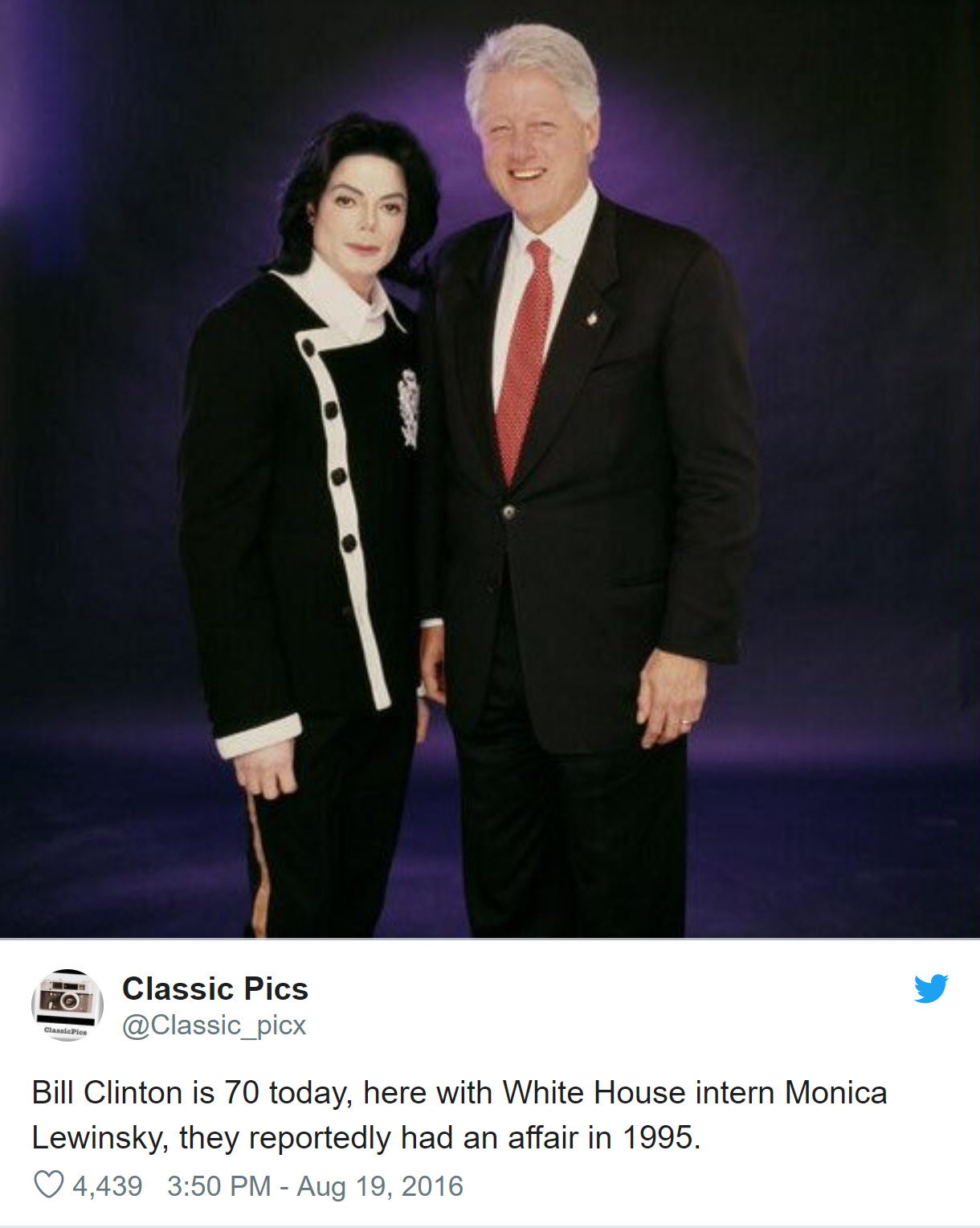 Actually, that’s Michael Jackson, but you didn’t need us to tell you that. The real Monica was probably out writing a book or selling purses while these two were getting acquainted. Who knows? Maybe MJ was Bill’s rebound.

Wow! We’re sure that whatever Madonna’s up to these days, she’s probably offended by this. 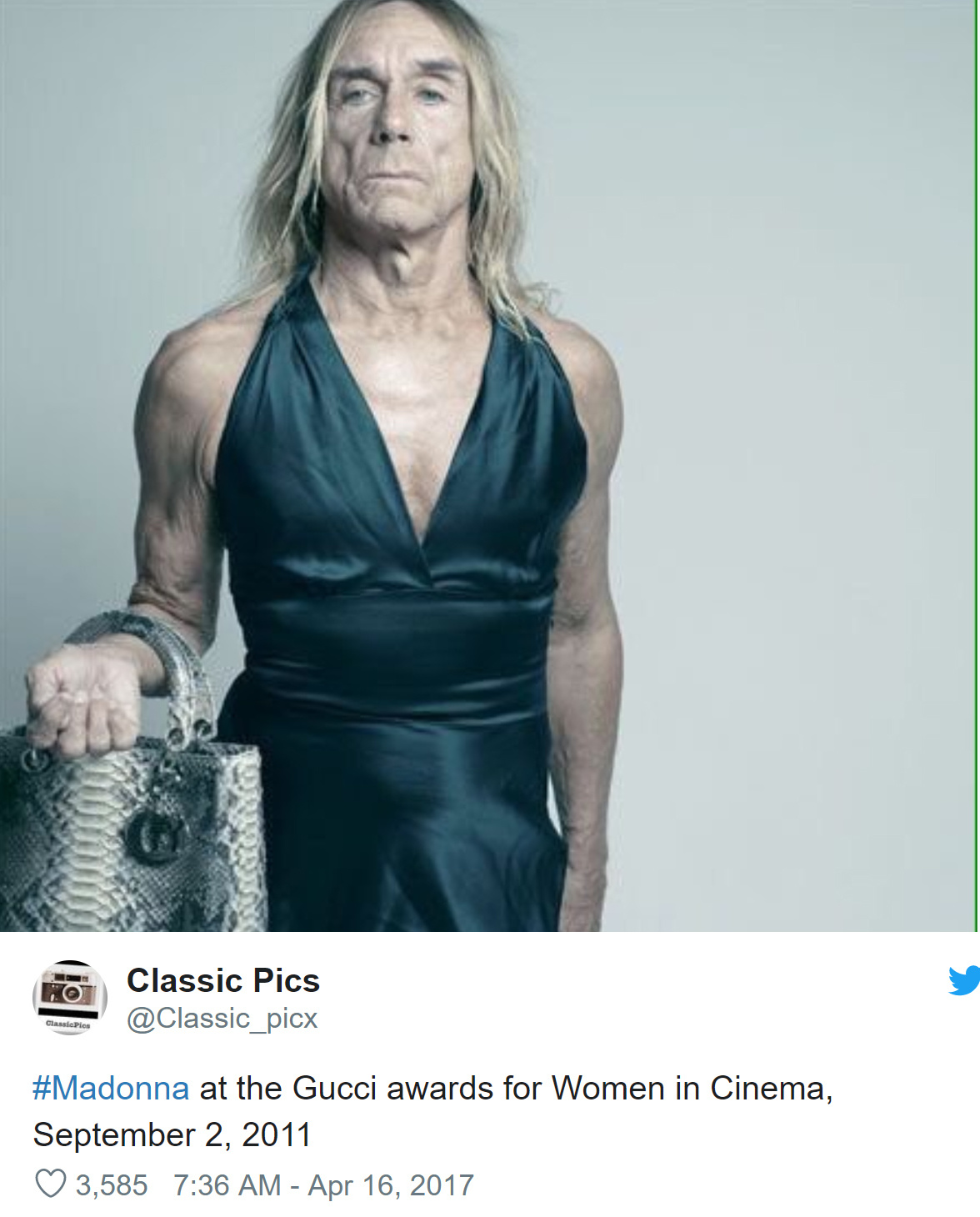 Some might say that this post was ageist. But some of you had to double-check to make sure this really wasn’t 60-year-old Madonna, who looks great by the way. But kudos to Iggy Popp for looking so cute with his Gucci purse and that fabulous dress.

Oh wow! Muhammad Ali looked really good for someone who was 74 way back in the year 1974. 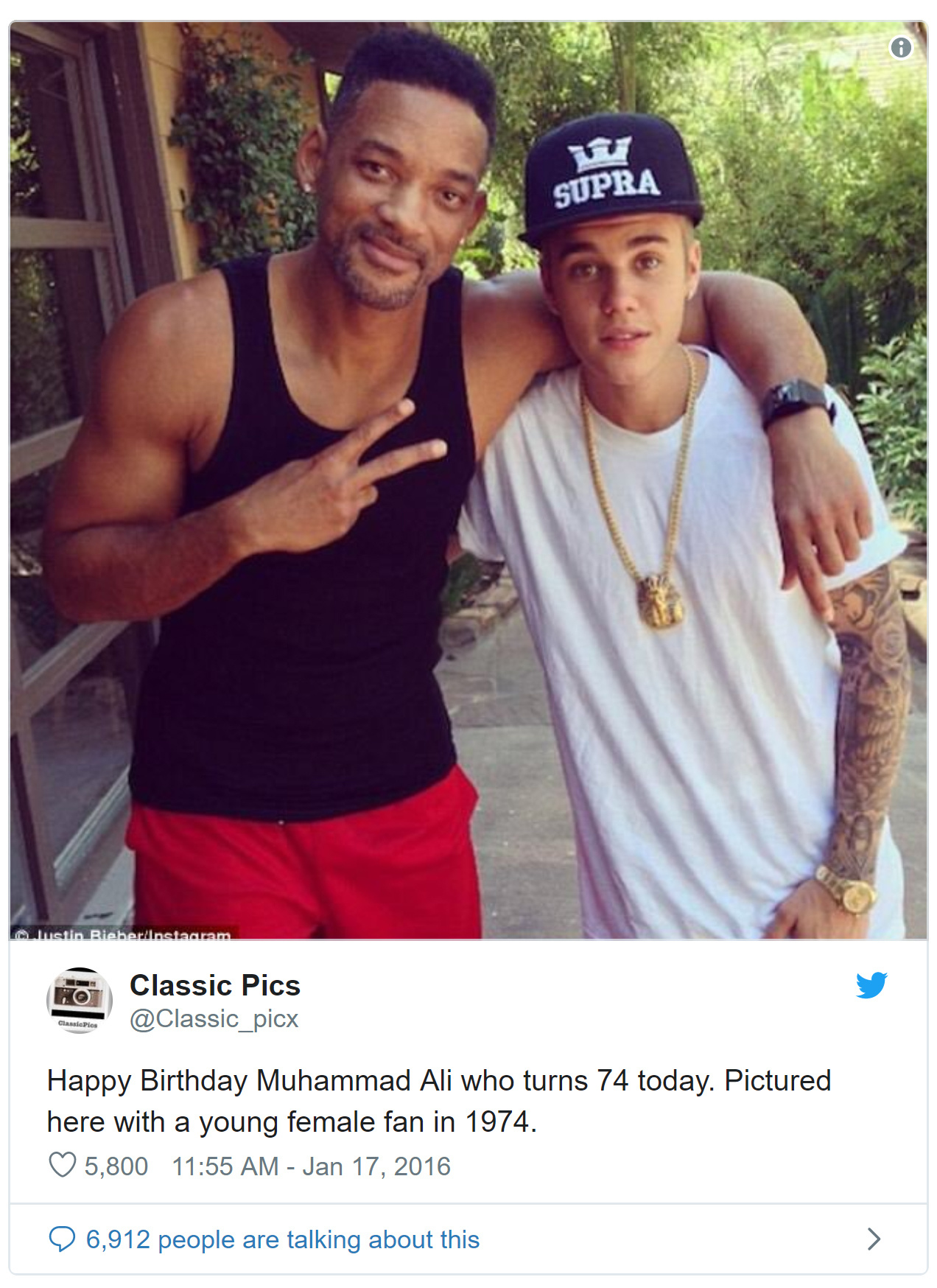 But wait! Isn’t that Will Smith? And that “young female fan” who’s posing next to him looks an awful lot like Justin Bieber. Hold on a minute! It is Justin Bieber! He must have traveled back in time. This one will have you laughing so hard you’ll need to change your pants. If it helps, Smith did play Ali in a 2001 film.

Depending on your point of view, it’s either Keanu Reeves and Alex Winter, or this celebrity duo is someone else entirely. 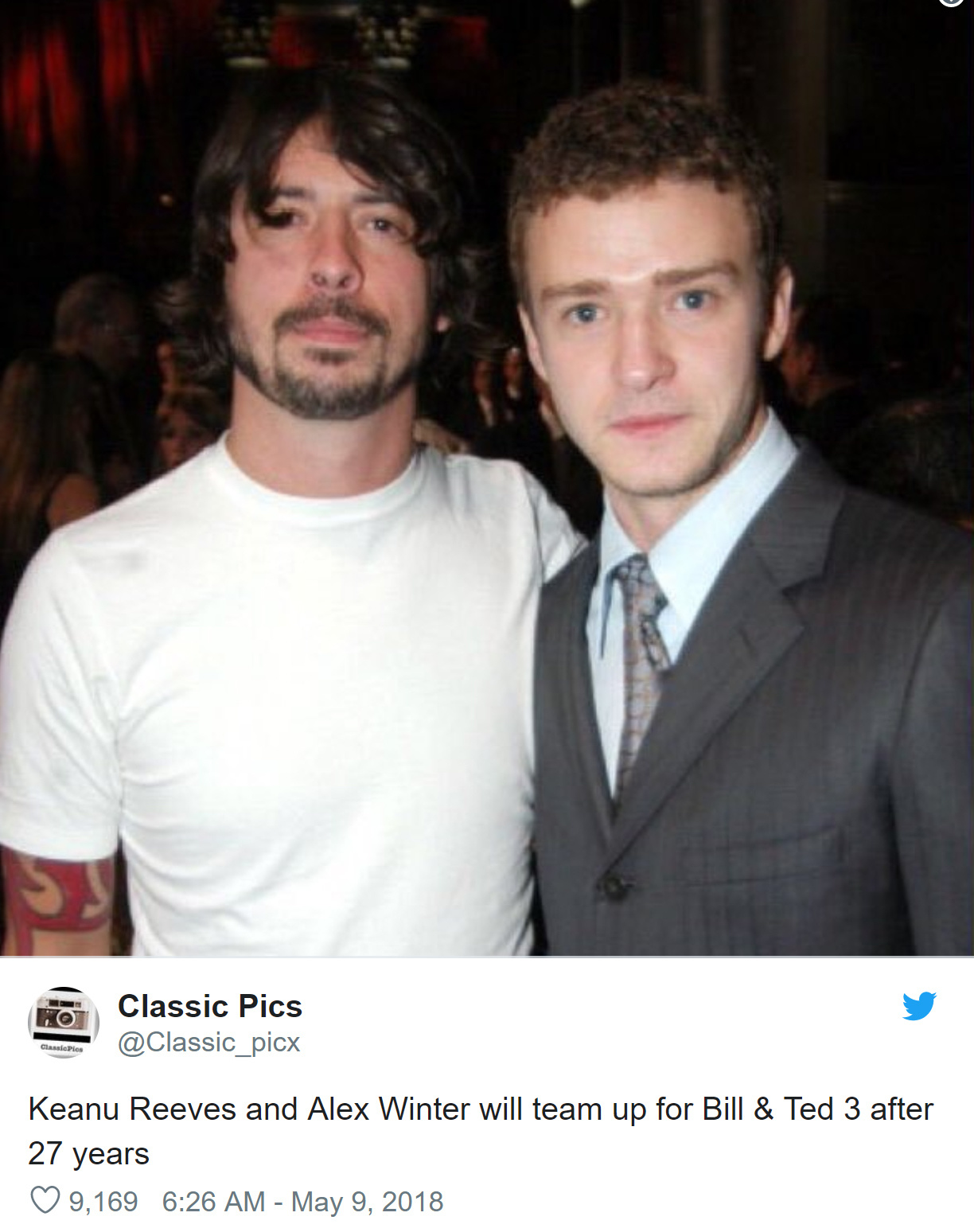 Obviously, it’s a photo of Dave Grohl and Justin Timberlake, but Grohl’s hair is definitely giving us some Keanu vibes here. And who knows? Maybe they will go watch Keanu and Alex’s “Bill & Ted 3” together.

It doesn’t take an Ed Sheeran fan to figure out that this guy is definitely not Conor McGregor. 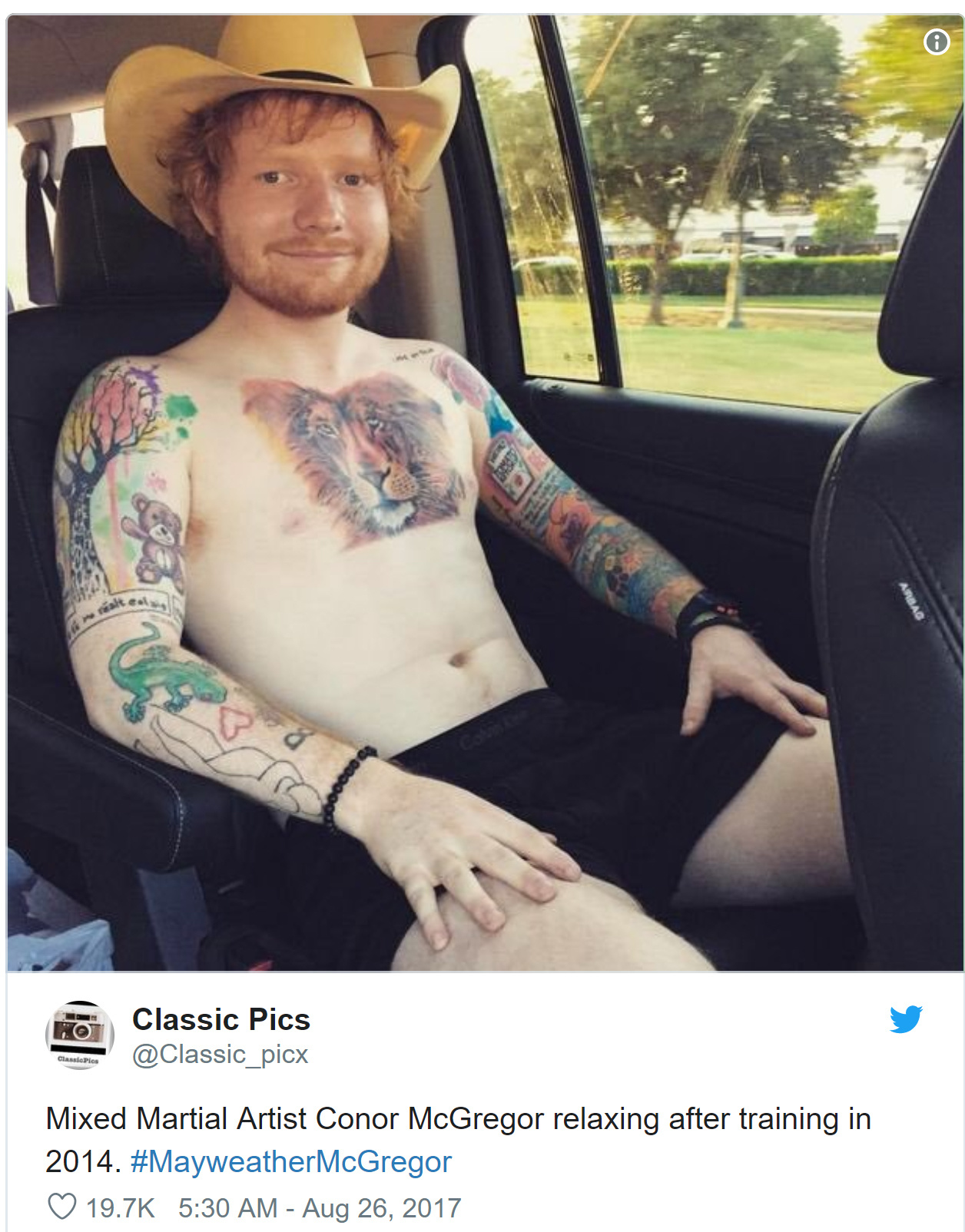 It’s clearly not Conor, so don’t believe everything you read on Twitter. On the other hand, the tweet doesn’t necessarily say it’s not Ed Sheeran either. Either way, prepare to throw your head back and laugh at the insanity.

A lot of people probably read the caption on this photo and tried to adjust their phone’s brightness. 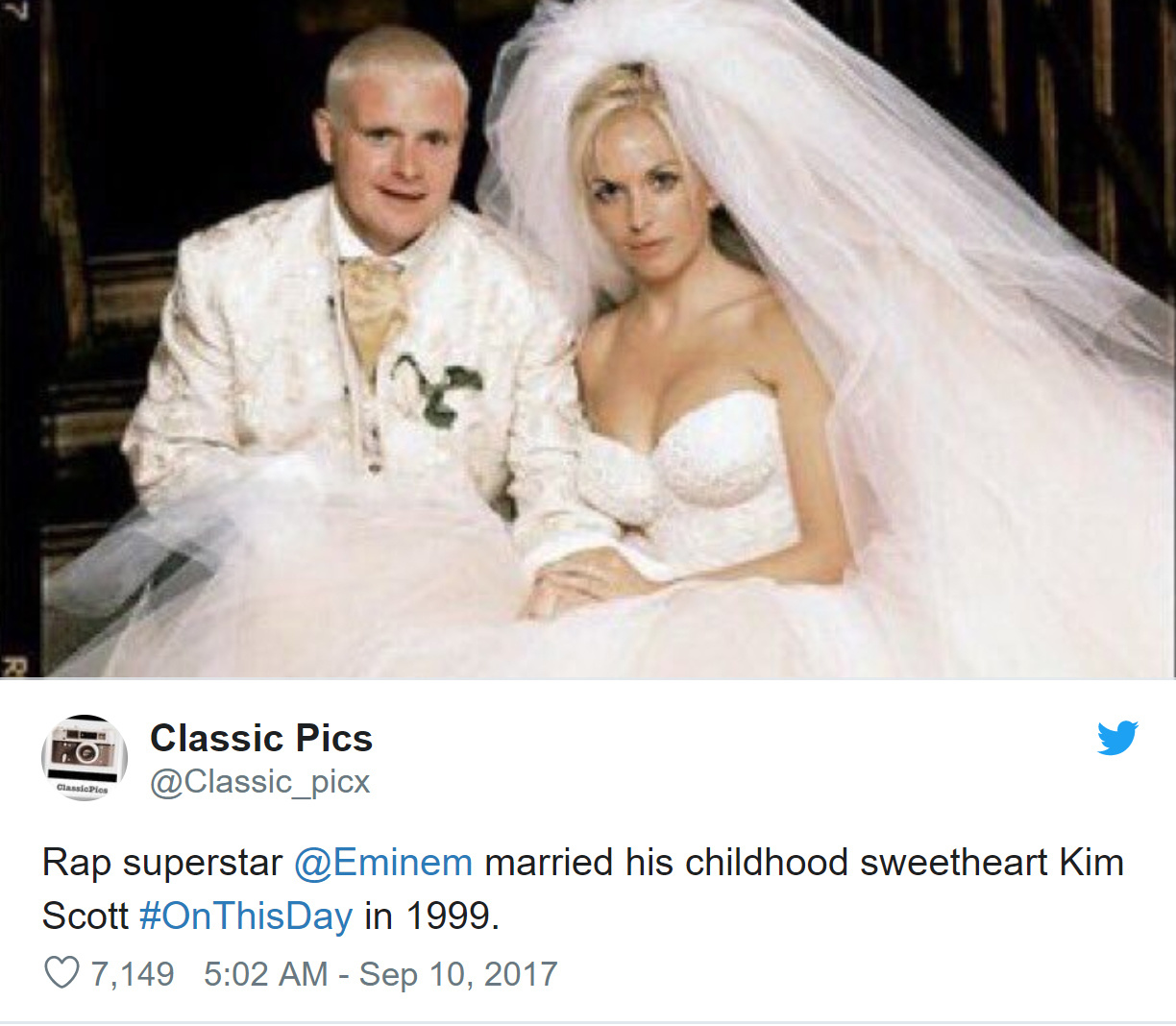 Eminem and Kim Scott? Really? It’s actually former English soccer player Paul Gascoigne and his now ex-wife, Sheryl. But we’re sure that Eminem didn’t mind being compared to someone else who was famous.

Well, she’s a redhead and she’s wearing a crown so it must be Sarah Ferguson then, huh? 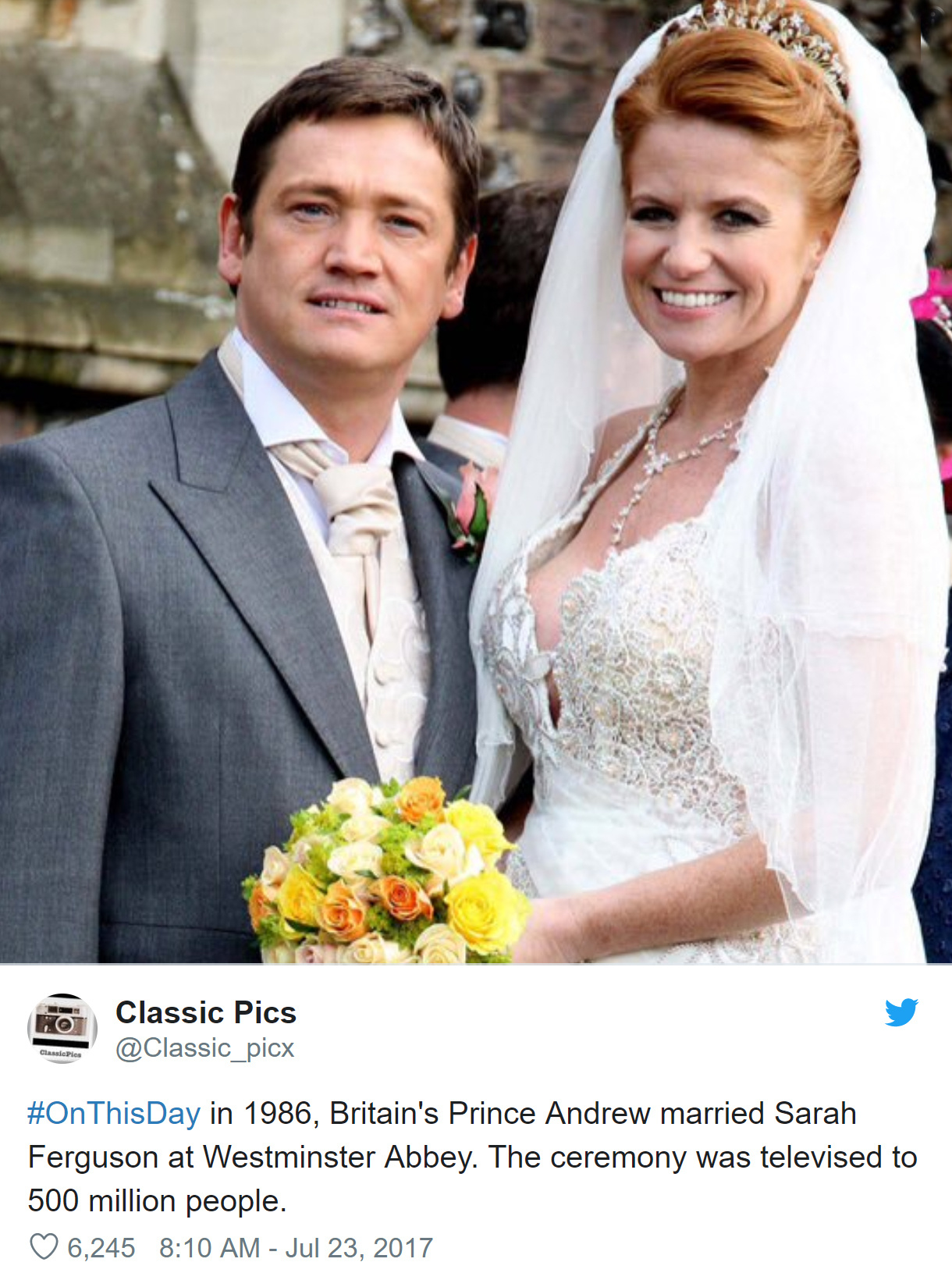 It turns out this isn’t Prince Andrew or Sarah Ferguson. We’re not sure if their wedding ceremony was televised to millions of people, but we doubt it. But you know, whatever. You stick with your Duke and Duchess, and this parody account will stick with theirs.