Blame it on fate or the stars aligning, but sooner or later, life will serve one of its little surprises on a proverbial silver platter. In this case, it will serve it to people in the form of some clever t-shirts. That’s right! Now there are some people who are in the right place at the right time but these folks were wearing the perfect t-shirt at the perfect time. In fact, the folks on this list might have to thank their t-shirts for their 5 minutes of fame after their encounter with the legend that inspired their themed t-shirts.

Every “Saturday Night Live” viewer from the ‘90s should be familiar with the phrase “Suck it, Trebek.” 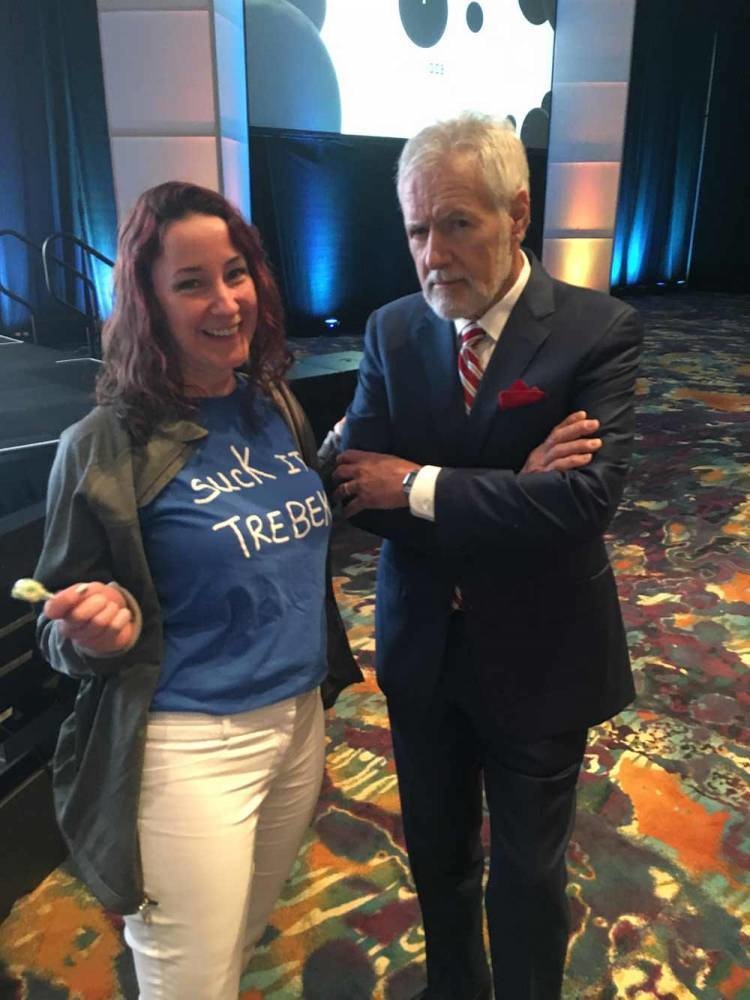 Will Ferrell played Trebek during SNL’s Jeopardy skits, and he used the iconic phrase on this t-shirt a lot. But Alex Trebek doesn’t seem quite as amused to being told to suck it by this happy-go-lucky fan. She’ll take epic fail for 100, Alex.

Baseball pitcher for the Houston Astros Justin Verlander is no stranger to running into fans of all ages. 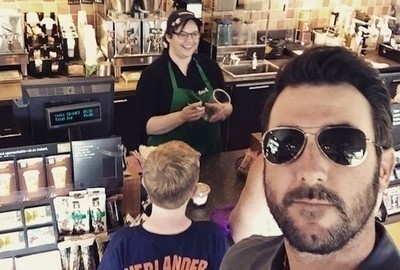 But in this case, he must have looked at the back of this kid’s shirt and thought, “I shall call you, Mini-Me!” We’re willing to bet this young man in front of him got the shock of his life when he turned around and came face to face with his idol.

Imagine wearing a Nick Offerman shirt one day and then actually running into the actor himself. 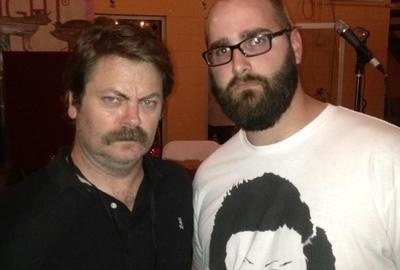 Nick Offerman is best known as Ron from the NBC sitcom “Parks and Recreation.” Ironically, the shirt was a gift from a friend. What are the odds that his friends would have run into the real Nick Offerman? Mind blown!

This guy’s t-shirt and the photo prove that if you put your wish on a t-shirt, it will eventually come true. 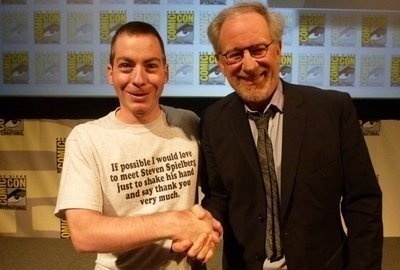 All he wanted was the chance to shake the hand of one of the most amazing movie producers in Hollywood history. Lucky for him, he got the chance to do just that when he ran into his idol at Comic-Con.

You have to give these “Game of Thrones” fans kudos for wearing the shirt of a simple-minded servant. 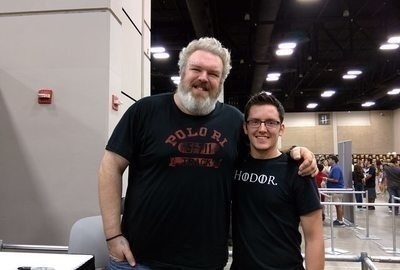 Hodor worked the stables and served the House of Stark at Winterfell. But imagine running into the actor who plays him, Kristian Nairn? It must have been quite an experience to run into this tall fellow at a convention.

What are the odds of running into actress Sharon Stone while walking around in Tel Aviv? 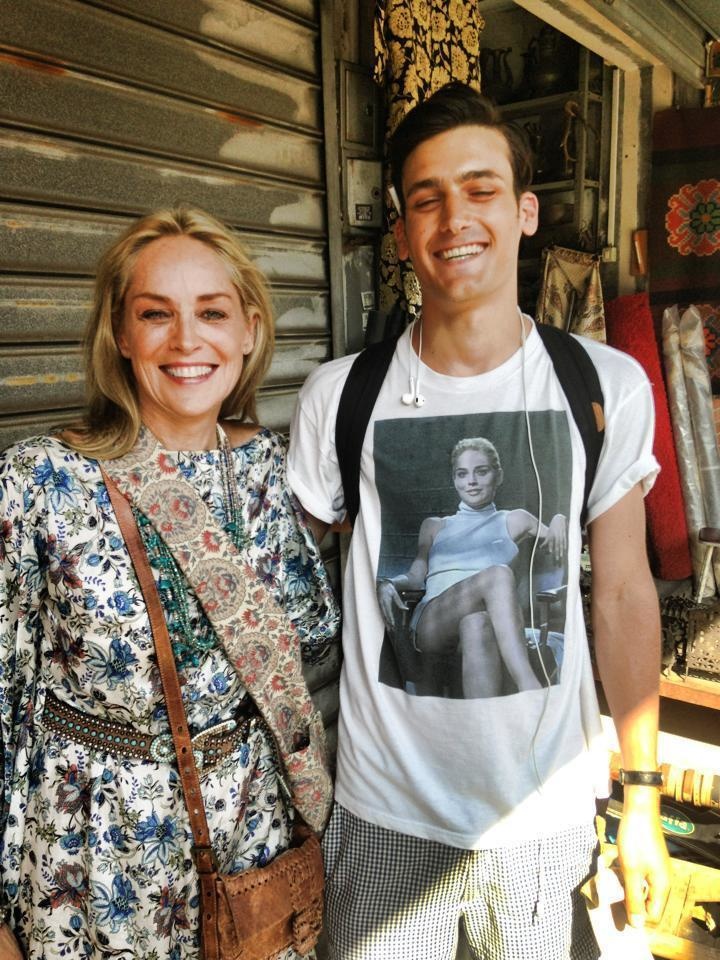 This lucky person was out and about but wearing a “Basic Instinct” t-shirt when she ran into the film’s leading actress. They probably bragged about this chance encounter a lot on social media, and who could blame them?

George Takei probably wondered what it’d be like to be so famous that there’s a t-shirt with his face. 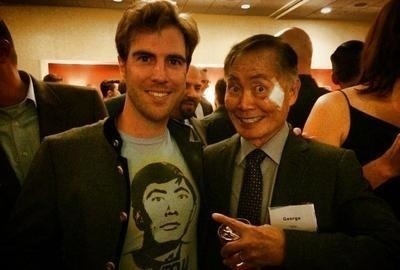 So, when he saw this guy wearing a t-shirt with his face on it, he probably gasped and said “Oh my!” It looks like they both made each other’s day. The fan got to meet his idol and George received a serious ego boost.

We’re sure that Arnold Schwarzenegger already knows he’s number one, but just in case, he didn’t… 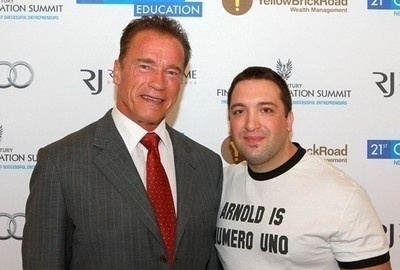 This fan wore a t-shirt that reminded the “Terminator” star that he’s number one. But after taking on Skynet, Predator, and California, this Austrian-American movie hero certainly deserves the love from this fan.

We don’t know if there’s an official bromance going on between Macaulay Culkin and Ryan Gosling. 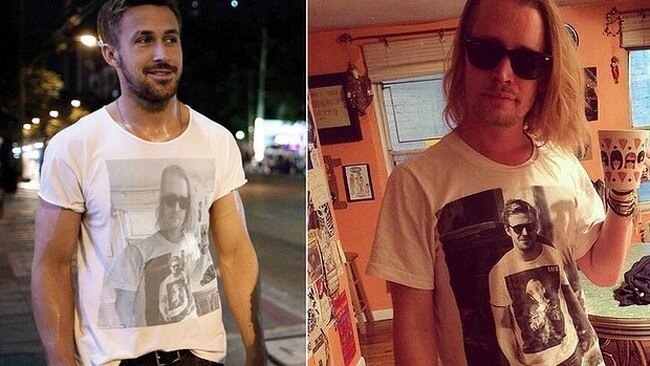 These two certainly have us wondering if they’re each other’s number one fans. Judging from the fact they’re wearing t-shirts off each other it’s a safe bet that they’re totally proud of their mutual platonic love.

He might just be a little boy, but he definitely has a lot of swag and a lot of luck thanks to this shirt. 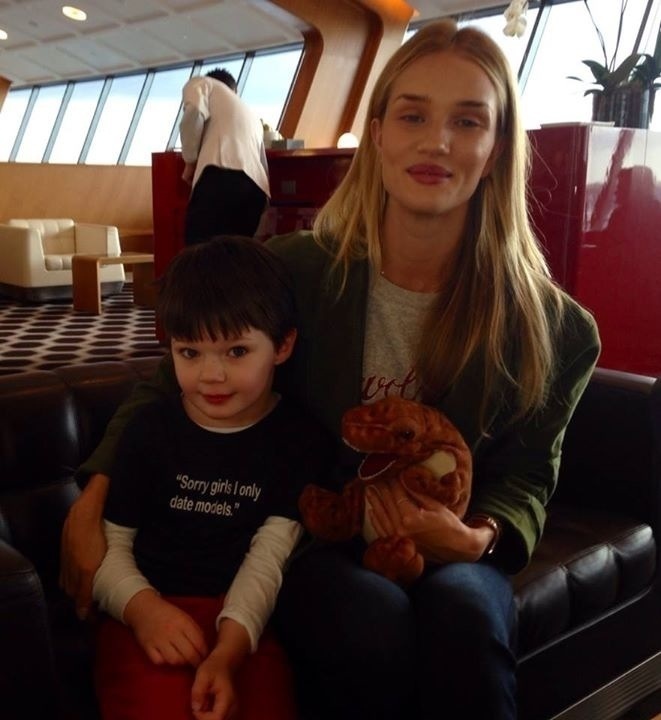 Wearing a shirt that said “Sorry girls I only date supermodels” was the ultimate model magnet. It caught the attention of Victoria’s Secret model, Rosie Huntington who turned his wildest young dream into a reality.