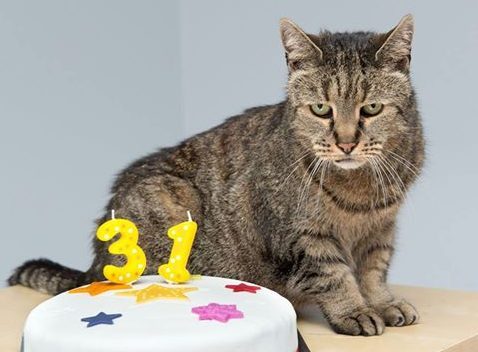 Nutmeg Is An Amazing Cat

A couple from Newcastle, UK, might have the oldest cat in the world. His name is Nutmeg and he turned 31 last March.

According to a Facebook post made by the Westey Veterinary Group, Liz and Ian Finlay adopted the cat 26 years ago. It was 1990 and at that time they were told the cat was 5 years old.

On June 2015, Nutmeg had health issues and was attended in the hospital of this Veternary Group. Once he recuperated, his vet, Laura Gillis invited him to celebrate one more year of life with a delicious cake.

Nutmeg Has An Age Rival

Without taking away credit from his well lived years, we have to tell Nutmeg something: there is another cat who has been officially declared the oldest cat of the world.

26 year old Corduroy, born in August 1989, holds the official Guinness World Record as the oldest cat in the world. According to the Telegraph, this kitty lives with his human, Ashley Reed Okura, in Sisters, Oregon.

"Your only obligation in any lifetime is to be true to yourself." -Richard Bach 📸 @trueanimaltales #meow #philosophyofcorduroy #27andpouncing