We have all grown up watching Disney movies and no matter what is going on in our lives, we can always find time to watch them all over again. And every time that we do watch them again, we notice something or understand something new that we never did before. Sometimes, we also spot new Easter Eggs that the producers have left for us in the movies. And each time that we do, we come up with new theories as to what could have been going on in the Disney universe. Here are some weirdly persuasive Disney Animated movie fan theories that will leave you in deep thought and make you wonder if you even knew how to watch the movies the next time you do.

Moana Dies at the Beginning 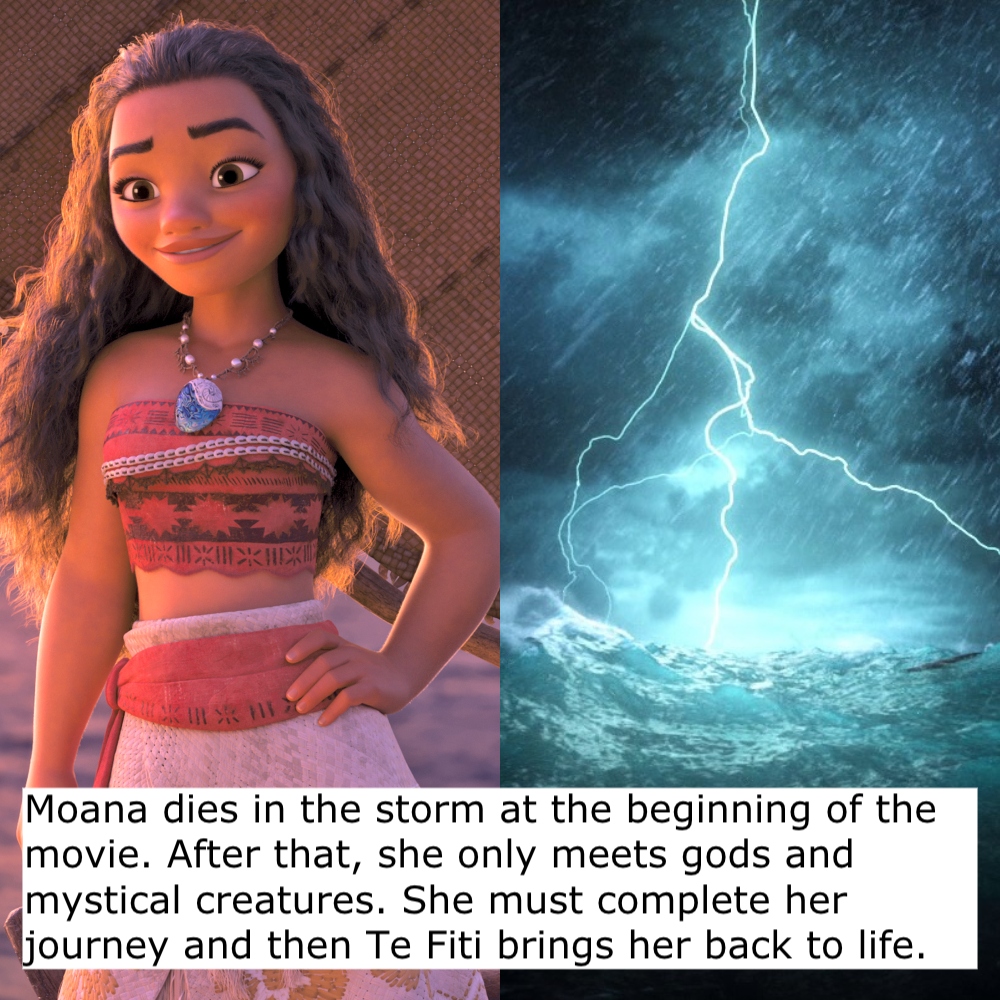 This particular theory suggests that Moana dies in the storm at the beginning of the movie. To back this up, this theory points out that Moana only encounters gods and mystical creatures until she returns to her tribe. Therefore, her journey is actually a fight for her life.

Finding Nemo Is About Marlin’s Grief 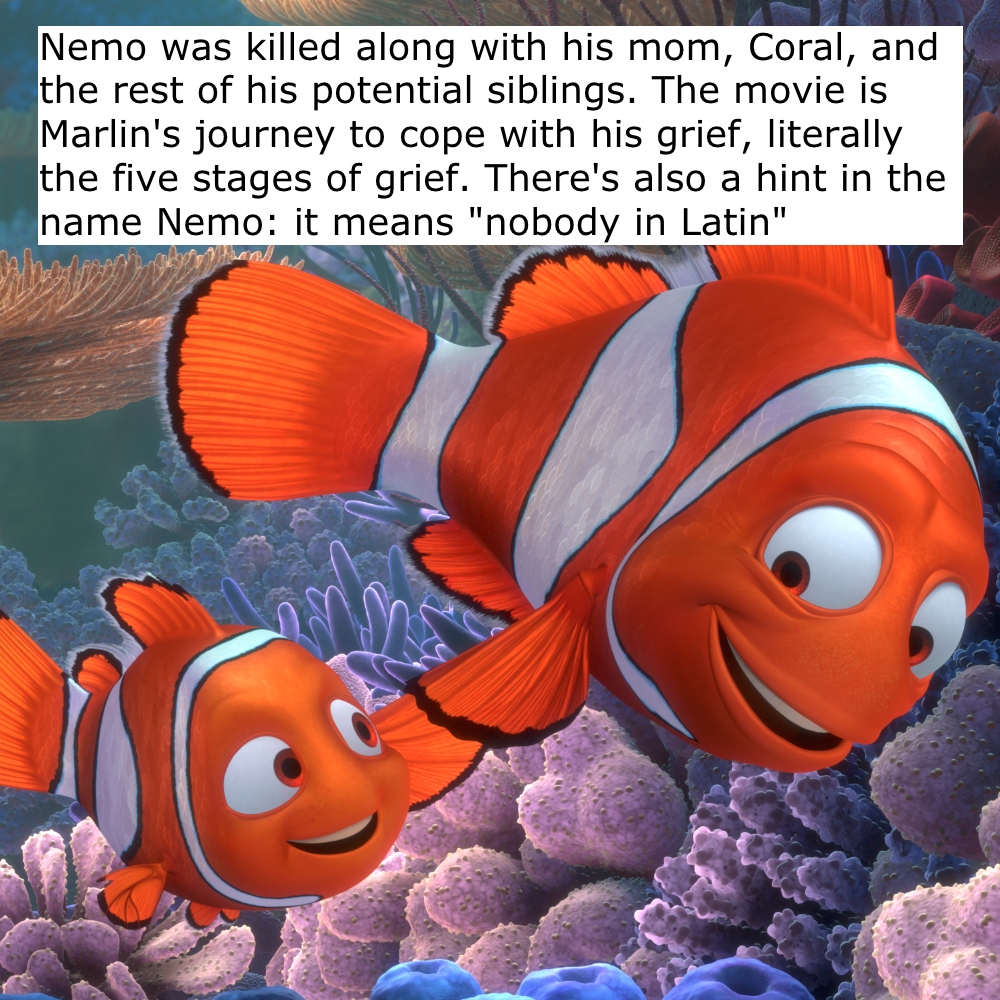 This next dark Disney theory says that Finding Nemo is actually about Marlin’s grief. This theory controversially suggests that Nemo dies in the barracuda attack at the beginning of the movie and that the film’s plot mirrors the five stages of grief. During denial, Marlin doesn’t want Nemo to attend school. In anger, he yells at him. During bargaining, Marlin journeys across the ocean, he feels despair when Nemo has flushed down a drain, and finally, he reaches acceptance when he can let go of the past.

Neverland Is the Afterlife 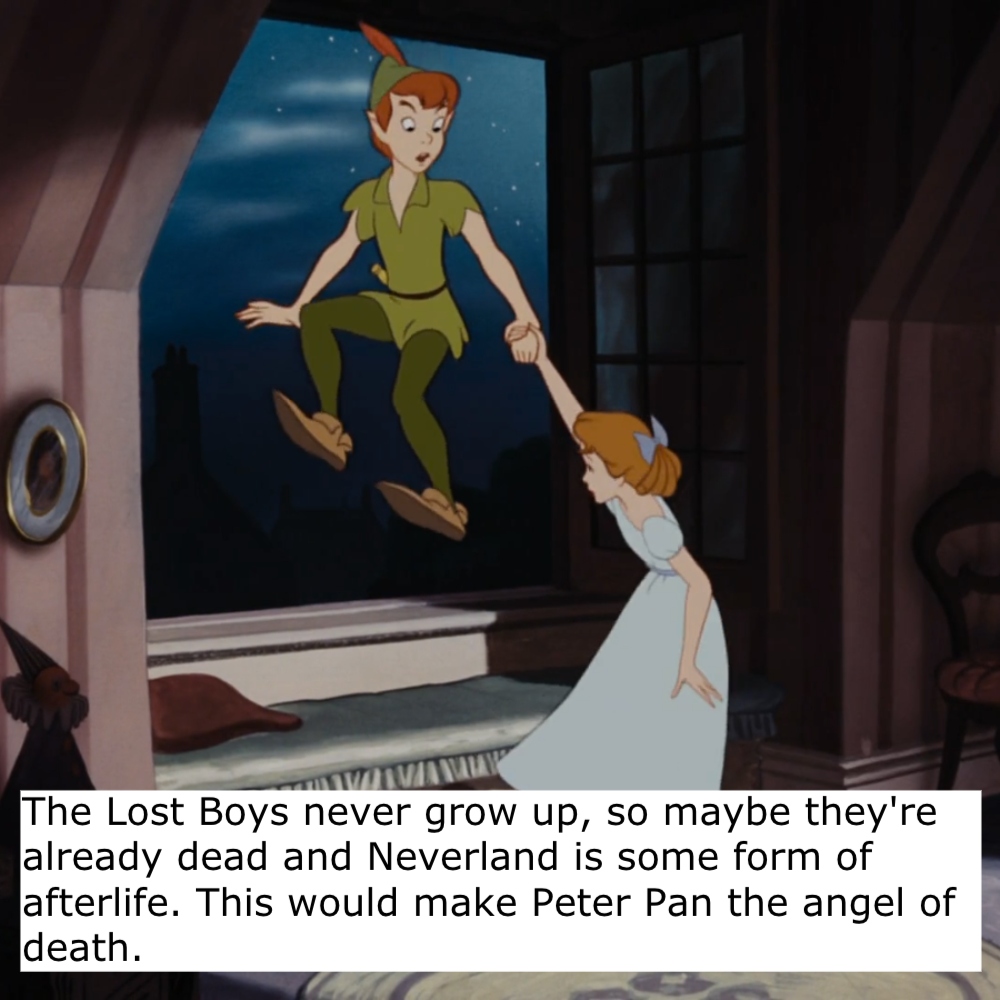 Here’s another dark take on one of your favorite classic animated Disney movies. Some viewers have interpreted Neverland — the home of Peter Pan and the Lost Boys — as the afterlife. This would explain why none of the characters grow up, and perhaps why Peter famously says, “To die would be an awfully big adventure.” This theory is actually backed up by the sad fact that Peter Pan author JM Barrie’s brother passed away at only 13 years old. Makes you think.

Elsa Was Hidden Because of Rapunzel 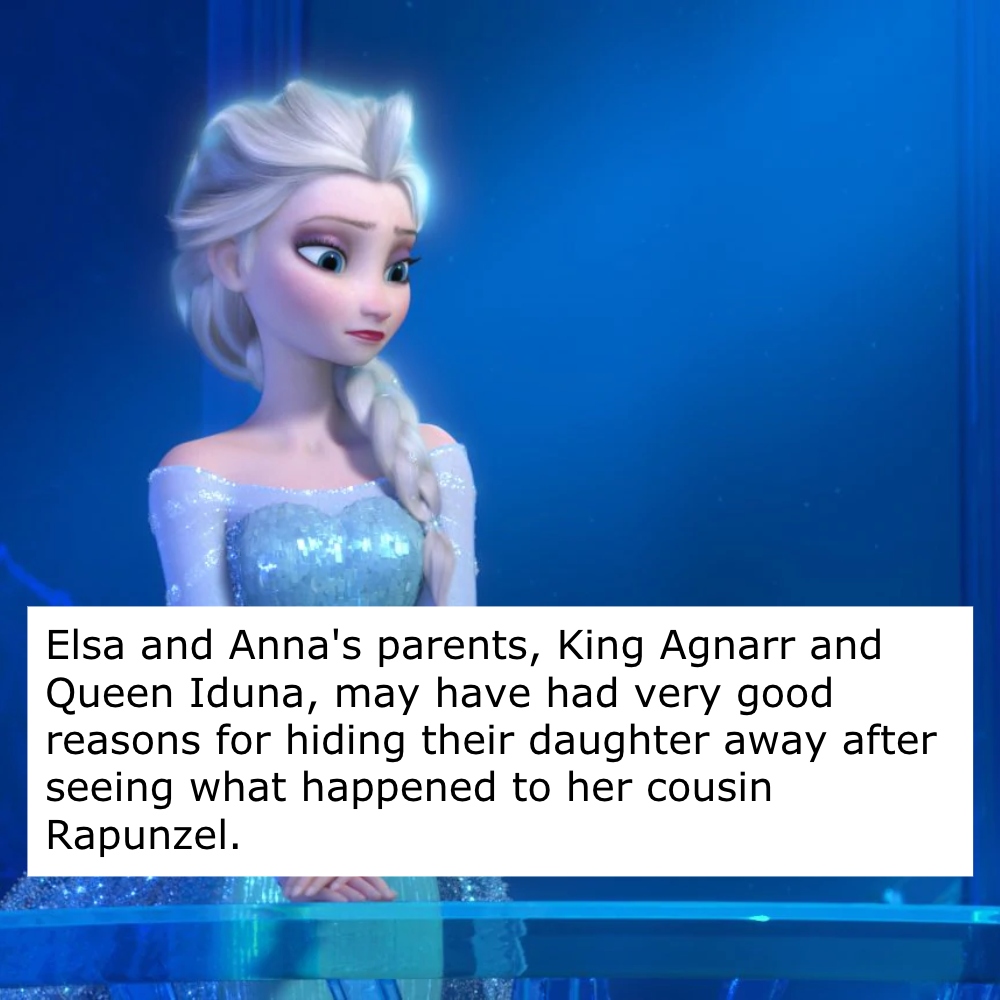 Alright, if you’ve been following our Disney theories so far, you’ll know that fans suspect that Elsa, Anna, and Rapunzel are cousins. And, we’ve seen that this theory goes further by pointing out that blond hair is magical within this family. Because of this, believers of this theory speculate that Anna and Elsa’s parents — King Agnarr and Queen Iduna — kept Elsa’s powers a secret because of what happened to Rapunzel. This means that Mother Gothel didn’t just keep Rapunzel locked up, but also kept the two sisters apart. 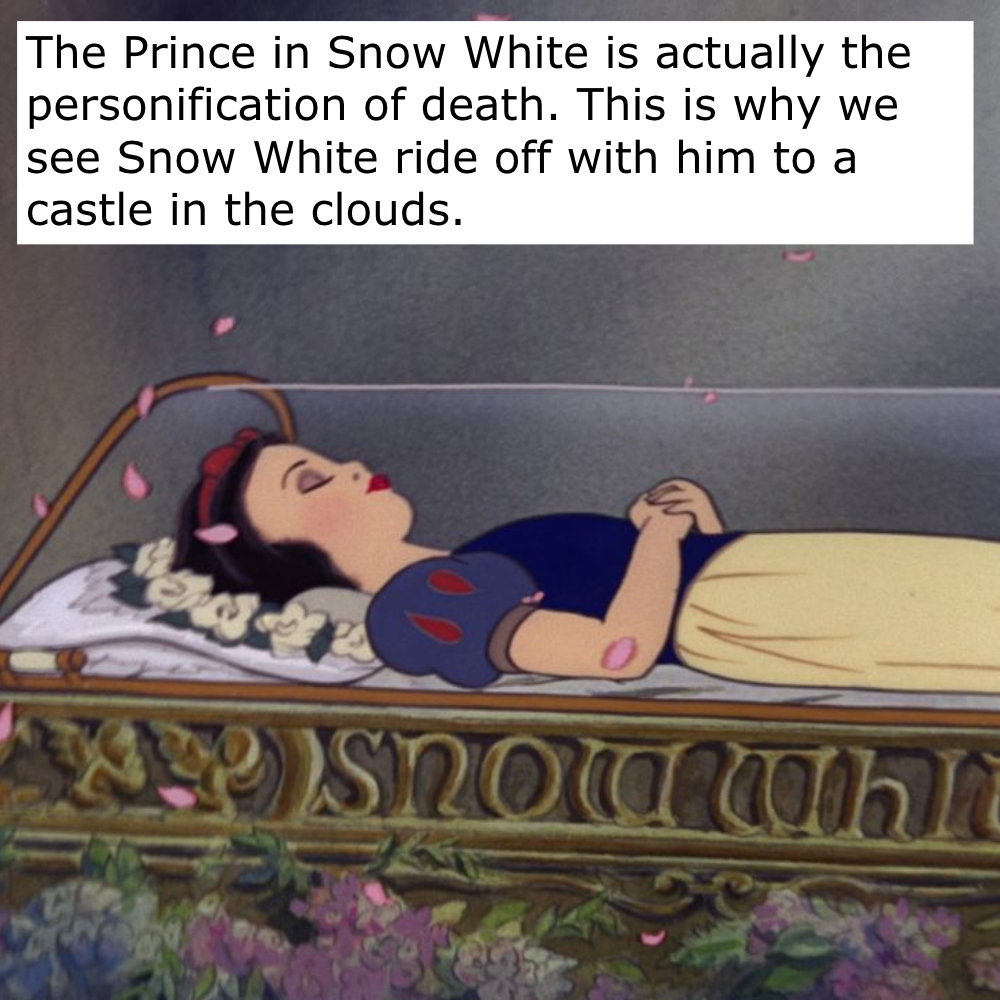 At the end of Snow White and the Seven Dwarfs, the fairest of them all receives true love’s kiss. The Prince hears that Snow White is resting in a glass coffin in the woods, so he travels to her, kisses her, and supposedly breaks the spell. But, what if after a year in a glass coffin, Snow White was actually at the end of her days? That would make the Prince the angel of death who escorts her into the afterlife. 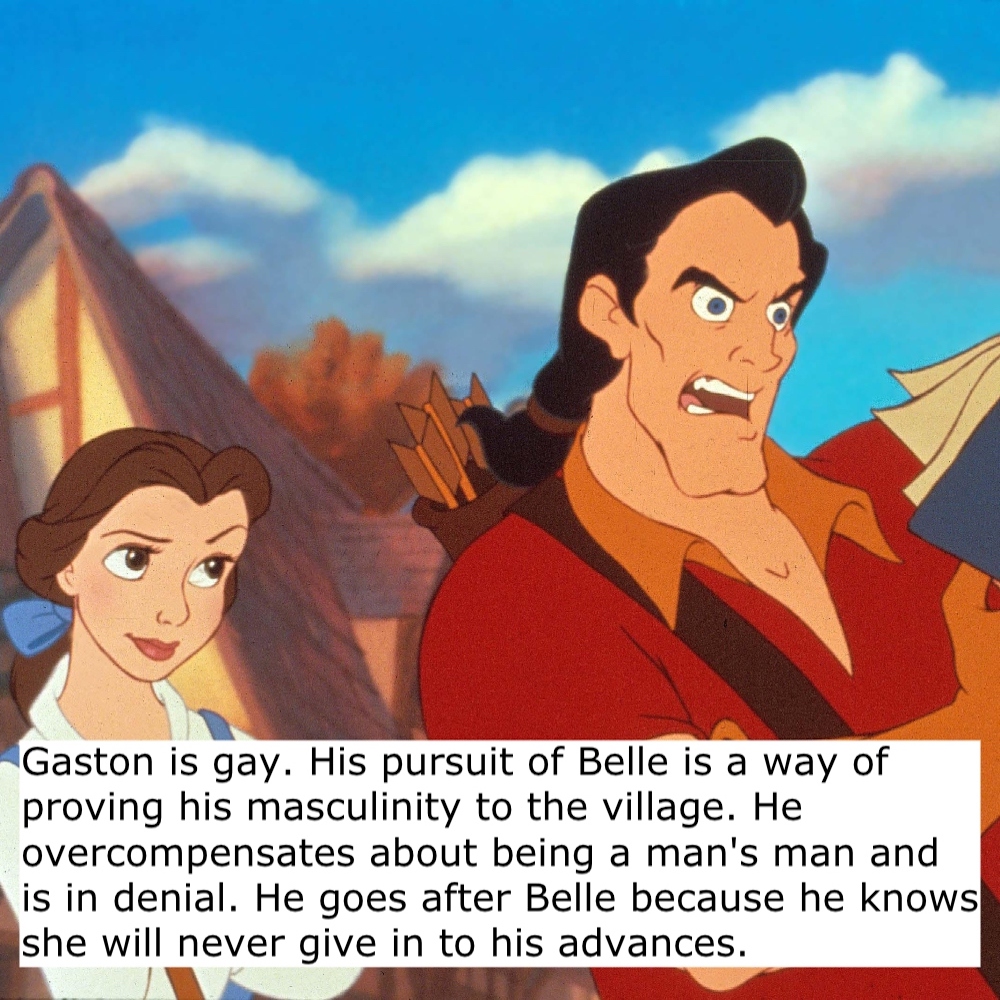 There’s not exactly evidence for this next Disney theory, but we have to admit that we like it. This fan-generated idea is that Gaston is gay and only goes after Belle because he knows she will never reciprocate. This way, Gaston can appear macho but never have to be in a relationship with a woman. Plus, the live-action remake showed us that Gaston’s sidekick LeFou is gay, so perhaps the two are in a secret relationship.

Rapunzel, Anna, and Elsa Are Cousins 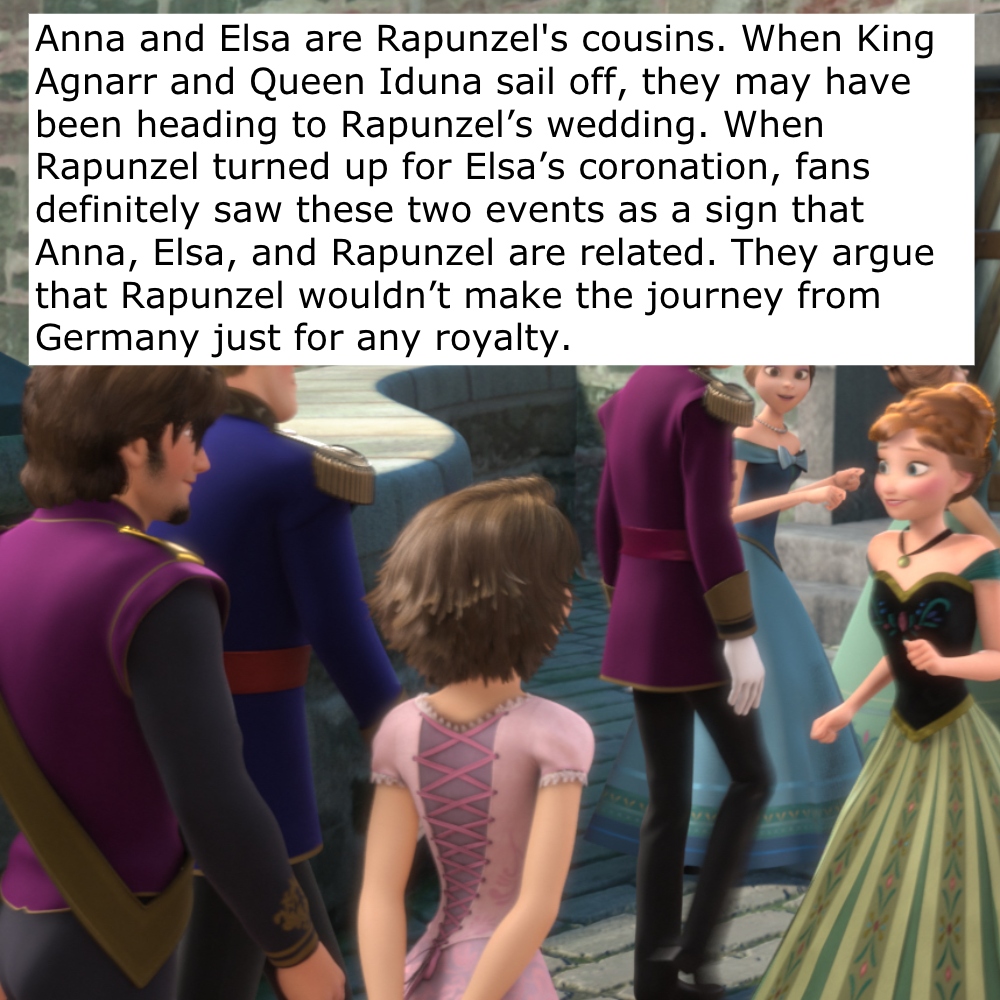 OK, any Disney fan worth their salt knows that brunette Rapunzel and Eugene attend Elsa’s coronation in Frozen. But why? Whilst these two could just be friendly royals, some suspect that Rapunzel is actually Anna and Elsa’s cousin. This theory posits that Anna and Elsa’s parents were attending Rapunzel’s wedding when they left on their ill-fated ship. Interestingly, three years pass from the shipwreck to the plot of Frozen, which is also the length of time between the movies. 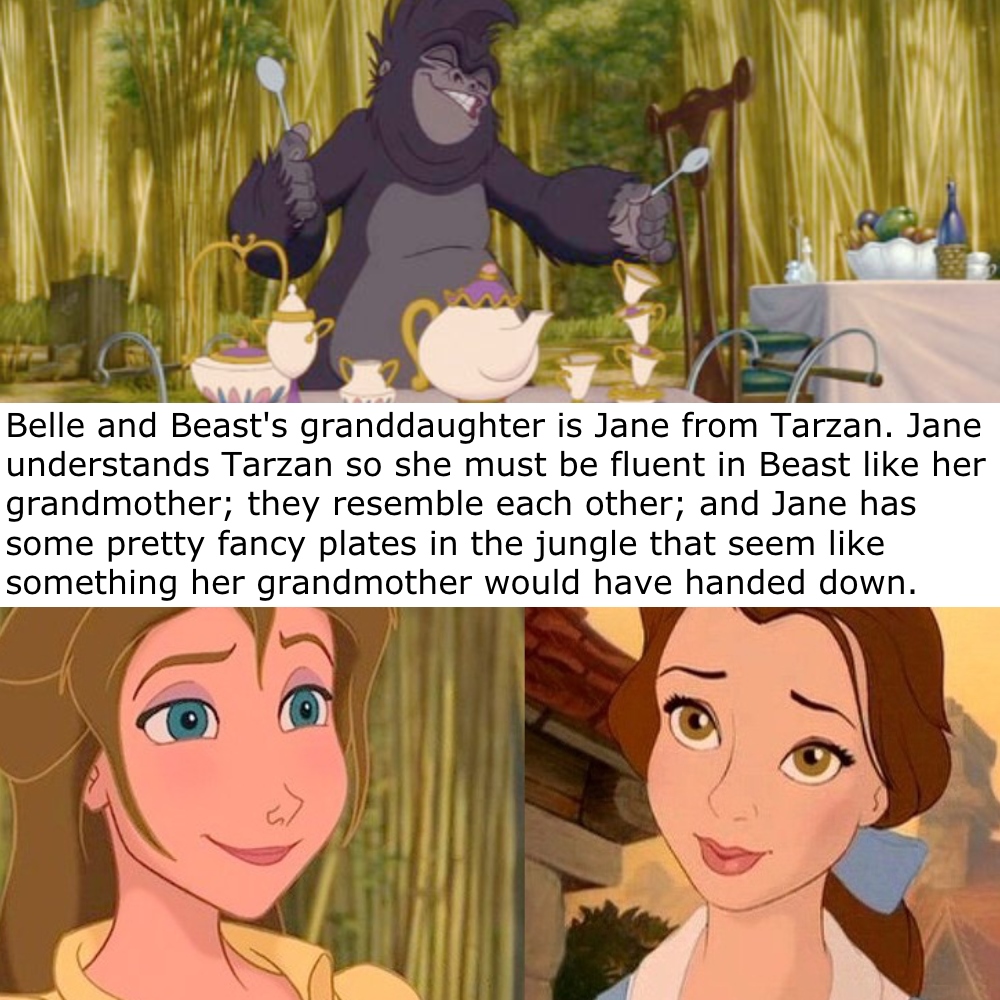 When you spot a character from another Disney movie in the movie you’re watching, you could just accept it’s a cute reference. Or, you could build an entire theory around it. In this case, in Tarzan, you can clearly see a tea set that looks just like Mrs. Potts and Chip from Beauty and the Beast. On top of that, Jane from Tarzan does bear a striking similarity to Belle from Beauty in the Beast. Perhaps Belle is her grandmother? 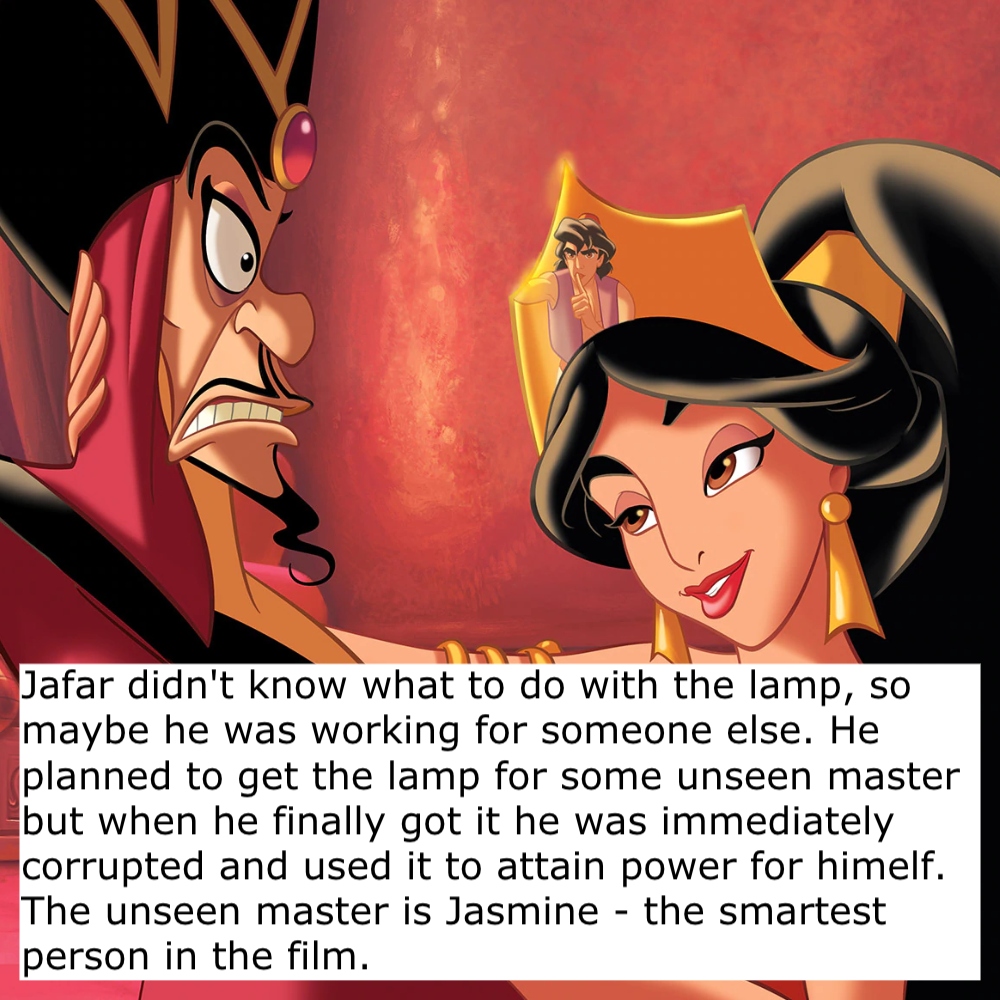 Our next Disney theory is a real gamechanger, and we’re not sure we totally buy it. This theorist claims that Jafar in Aladdin didn’t want the lamp for himself, because he clearly didn’t know what to do with it. This person posits that Jafar was working for Jasmine, who benefited most from the lamp. Jasmine is the most trapped character in the movie and arguably knows that Aladdin isn’t a royal from the moment she sees him. In the end, she gets everything she wants.

Megara Is a Young Yzma 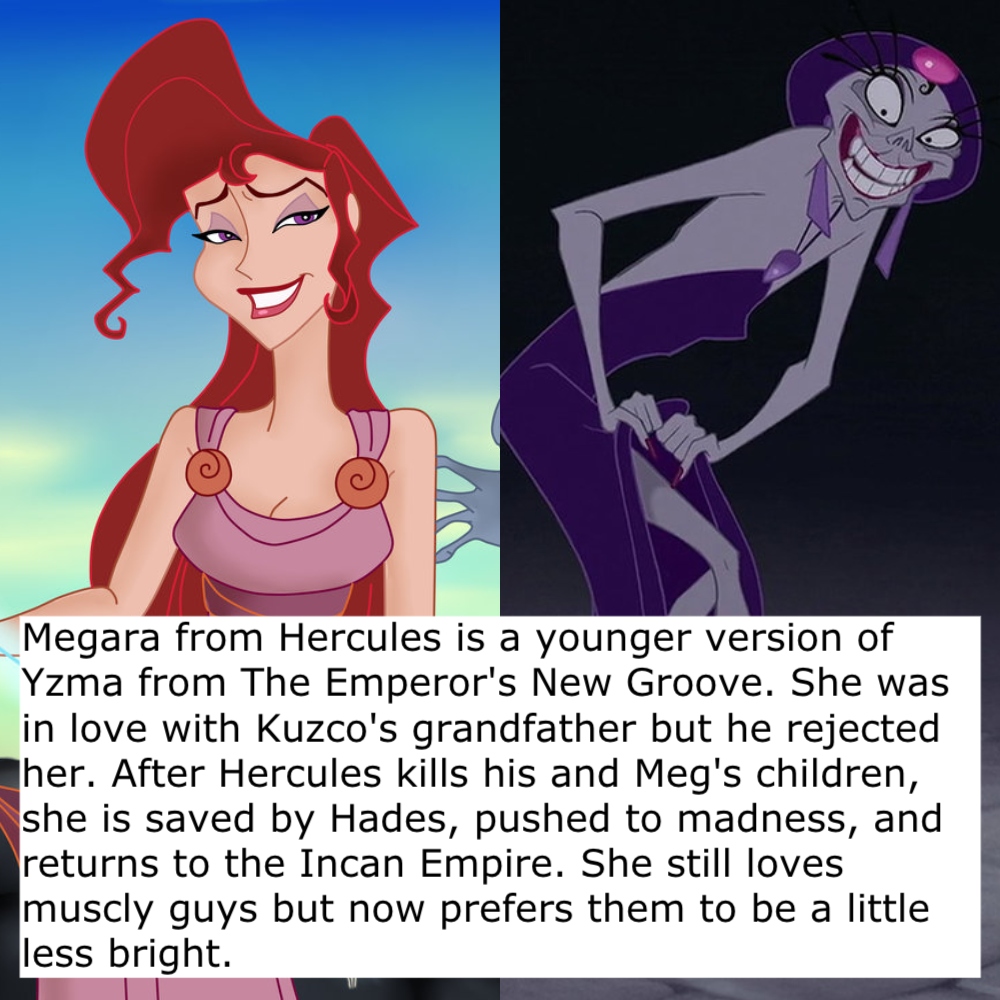 The theory that Megara from Hercules is a younger Yzma from The Emperor’s New Groove is a sprawling one. The original post lasts multiple pages and uses actual mythology on top of Disney lore. Basically, this theory argues that Yzma was a lovesick Hades worshipper that left the Incan Empire and lived the plot of Hercules. Following that, actual Greek mythology kicks in and Hercules is responsible for the death of his and Meg’s kids. After that, she’s saved by Hades, pushed to madness, and returns to Peru.